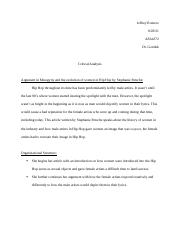 Calling Abbott a misogynist uses devil terminology. The use of god and devil terms uses commonly known terms that have a good or bad implication. This is a strong word that society has interpreted in a way that demotes males because of their sexist beliefs about women. Gillard explains things Abbott has done to prove he is hateful towards women. She told the parliament of how she was offended while representing the women of Australia by this remark. People do not want someone who is labeled as a misogynist controlling their government. If Gillard had called him sexist, it would not have represented the extent of his blatant rudeness towards women accurately.

God and devil terms relate to the ad hominem fallacy. In this case Gillard is attacking Abbott by calling him a misogynist rather than arguing why Slipper should not be fired. Using positive and negative words to describe someone would convince people of their view because no one wants to be on the side of someone associated with a negatively connotated word. Abbott is associated with misogyny in this context and taking his side would lead to being on the misogynist side. Society is against misogyny because people should be seen as equals and do not like being rejected from society if they do not fit in.

Victim is another negatively connotated word. Gillard expresses her being subject to victimization. Using herself as an example of a victim relates herself to the group being affected which are women, specifically Australian women. Abbott directed catcalls toward Gillard in parliament and made her feel as if they are not equals. A man in her position would not have to experience the same thing.

She used this characteristic of victimization to show that she knows from experience that Abbott is a misogynist. This is valuable information to people of their parliament because they would not know that one of their politicians would do these things to another politician within their own government or to any woman in general. Stacking the deck is the fallacy in which the rhetor favors evidence that supports his or her view and ignores evidence that does not.

It could be that Abbott only hates Gillard. This does not necessarily mean that the rhetor and speech are demagogic. I do not believe that Gillard is a demagogue. Almost every argument that I can think of would have some of these characteristics of demagoguery present in their content. The rhetor should not be trusted if they focus their argument on topics of personal gain and do not seem logically backed up. Logical arguments contain information that would make the most sense for the group as a whole. They are based on explainable reasons and evidence. This leads me to believe that her argument is reasonable. Gillard, Julia. Lester, Amelia. Roberts-Miller, Patricia.

Since then, there have been many changes throughout America. Susan B. The Australian survey of social attitudes showed However, 9. Public support doing abortion in Australia has slightly went up in the last twenty years. This was a televised event before a large audience of politicians and government officials. My purpose in this critique is to evaluate the methodology used by Fisher, the substance of the speech and to ascertain its effectiveness. Her diction, intonation, body language, and choice of words throughout the speech were clearly employed to increase awareness to AIDS.

Fisher did achieve a standing ovation, which shows her points resonated with those in attendance. Julia Gillard, Australia's first female Prime Minister accused Tony Abbott, the head of the Liberal party, of recurrent occurrences of sexism and misogyny in a speech given on the 9th of October Gillard mentions instances including his description of abortion as "the easy way out", his deceptive characterisation of Australian women as housewives doing the ironing, and attendances at political rallies in front of posters influencing voters to "ditch the witch". Prime Minister Gillard has a duty in her role, not only as the Prime Minister but also as a woman in such a position of high rank, to represent the women of Australia. Although she must represent all Australians, being a woman herself, and being the model of the main woman in public life and power, how she allows herself to be preserved, replicates on how she permits all Australian women to be treated.